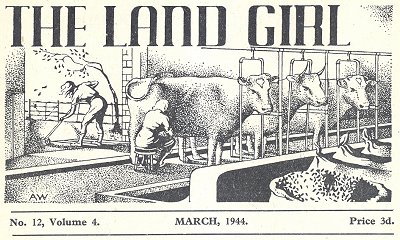 One way of preventing Land Girls from feeling isolated, was the publication of a magazine, entitled ‘The Land Girl’ which first went on sale 1st April 1940 for the cost of 4d. It was to begin as an unofficial Women’s Land Army publication. However, when the Ministry of Agriculture realised its popularity (selling around 21,000 a week!), the ministry funded its production. The magazine tried to unite Land Girls throughout the country, although not all Land Girls received the magazine.

Local Women’s Land Army news sheets were also distributed, carrying county news on the work of Land Girls within an area. A ‘Women’s Land Army Handbook’ was also published on 25th September 1944 which gave women a basic outline of typical issues which they would face and gave practical advice on how to deal with them.

Click here to see a series of posts which focus on drawings by Land Girls, which featured on the front page of the magazine.

Many thanks go to Stuart Antrobus, Bronwen Jones, Helen Van Dongen Laurie Kline, Catherine Procter, and Brian Herd who have shared the original copies of ‘The Land Girl’.

If anyone has any of the following editions of The Land Girl magazine and would be willing to share them, please e-mail Cherish Watton at info@womenslandarmy.co.uk: