Land Girl reminiscence: “The blizzards of 1941 were sudden and fierce…” 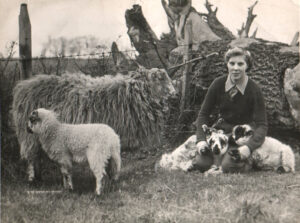 “The blizzards of 1941 were sudden and fierce and many sheep died in snow drifts. As we recovered them and took them to the shed it was decided that we should at least get the wool off them. Farm hands gathered round with many a wink and nod to watch us girls coping with it, but we got our revenge. After lunch we took matchboxes and put the sheep ticks in them. With the boxes half open, we slipped them into the bulging pockets of the farm labourers.

Discomfort, at first vague, showed on their faces as the ticks bit, followed by bewilderment and rage as we doubled up with laughter. We won the day and the respect of the men.”