Land Girl reminiscence: “Now my gel, take Freddy the bull to the next farm” 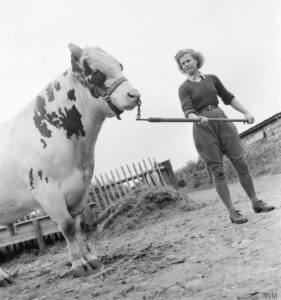 This photo of Land Girl Iris Joyce, shows how Irene would have tried to have led a bull.
Source: IWM D 8839

Many are the tales I could tell of my Land Army days but one of the funniest was the morning the farmer I worked for said, “Now my gel, take Freddy the bull to the next farm”. I led Freddy by a chain up the cart track, when in the distance we heard the braying of a cow. Sure enough, Freddy got the message. I was literally biting the dust behind him as he charged off in the direction of his lady love.

I found out later that it had been pre-arranged and the farm hands were hidden along the route to watch the fun but I was determined not to let them see how near to tears I was (nor how sore was my bottom).”