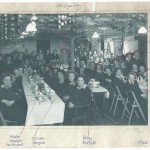 Land girls at Leighton Buzzard, Bedfordshire, have brightened up their WLA hostel hut for the Christmas party, 18 December 1946. A few of the young women have been subsequently identified. Mrs Meering was the YWCA Warden at that time, looking after the land girls’ welfare. Photos source: Mary Marley nee Keneford. Courtesy of Stuart Antrobus 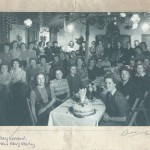 Christmas party time at the WLA hostel, Leighton Buzzard in December 1947. A few of the land girls have been identified. Photo source: Jean Carell. Courtesy of Stuart Antrobus 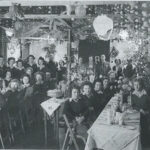 The last but one Christmas party to be held at the WLA hostel, Leighton Buzzard, Bedfordshire, December 1948. The hostel closed in around September 1950. The two men in the photo were most likely to have been from Bedfordshire County Agricultural Committee who employed the mobile gangs from the hostels in the county and contracted them out to local farmers. Photo source: Mary Perkins nee Godfrey. Courtesy of Stuart Antrobus