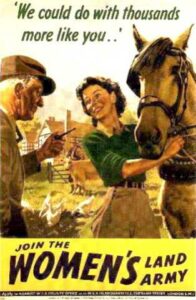 ‘The land army fights in the fields. It is in the fields of Britain that the most critical battle of the present war may well be fought and won’.

This quotation from Lady Denman, the Director of the Women’s Land Army, sums up the importance of the Land Girls during World War Two. For many girls, the ‘phoney war’ was all too soon becoming a reality as they had the opportunity to do ‘their bit’ and enrol for the Women’s Land Army.

Find out more about the WLA by looking through the timeline below. Events relating to the country as a whole, as opposed to the WLA specifically, are shown in brown

Lady Denman is approached by the Ministry of Agriculture to re-form the Women’s Land Army. She begins go make plans in terms of national organisation and recruitment, but there are delays in taking these proposals forward. 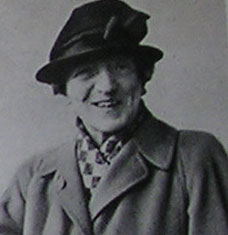 25th January: A National Service handbook lists the ‘Women’s Land Army’ as one of the civilian organisations which women could volunteer to join in the event of war.

3rd September: War is declared on Germany by Britain, the British Empire and France.

April: The Land Girl, a monthly magazine, is published by the Women’s Land Army, with Margaret Pyke as its editor. 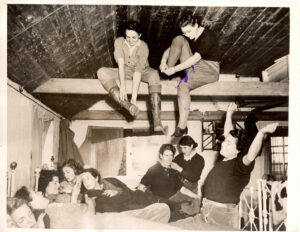 After a hard day’s work on the Lincolnshire farm where they are station these members of the Women’s Land Army don’t waste time before getting to bed. Source: Catherine Procter collection.

May: All British women aged between 19-40 have to register at labour exchanges for war work.

September: ‘In the Event of Invasion’, Land Girls are encouraged to stick to their jobs, but ‘The Land Girl’ issues advice on how to disable tractors if in real danger of capture by the enemy.

29th December: Minimum wages increased to 38 shillings for 48 hour week (or 18 shillings with free bed and board). 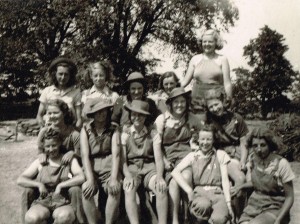 April: The Women’s Timber Corps is formed in Britain. More than 4,000 Lumber Jill’s are employed in forestry throughout the war. They were employed by the Home Timber Production Department of the Ministry of Supply.

June: The Land Army Benevolent Fund is started by Lady Denman to provide financial assistance to Land Girls who suffered illness or accident as a result of their work.

August: Recruitment to the Women’s Land Army is stopped by a decision of the War Cabinet (more workers were needed in the aircraft production industry).

May: Women’s Land Army headquarters moves back to London, but returns to Sussex after doodlebug attacks begin.

July: First complete series of Proficiency Tests had been completed.

January: Special consideration given to Land Girls who had been in the Land Army for 3 or more years who want to transfer to their home counties.

16th February: Lady Denman resigns as director of the Women’s Land Army over the decision to exclude members of the Land Girls from post-war financial benefits.