2015 is soon to come to a close. Let’s have a look back on some of the key Women’s Land Army and Timber Corps developments this year.

Publication wise, 2015 has been a major year. 2 brilliant new books have been published: Dee Gordan’s ‘Voices From The Past: Essex Land Girls’ and Marion Jefferies ‘Yorkshire Women at War: Story of the Women’s Land Army Hostels’. Both books provide valuable contributions through building up regional perspectives on the Women’s Land Army.

Stuart Antrobus’ 13-year project has culminated in an online roll call of all Bedfordshire Land Girls, including information on dates of service, farmwork and accompanying photos. This is a companion to his popular book ‘We Wouldn’t Have Missed It For The World: The Women’s Land Army In Bedfordshire’. Stuart is the only historian who has worked on compiling such a database – providing a lasting recognition of the work of Land Girls in Bedfordshire. 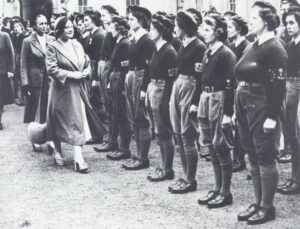 From a personal perspective, the website has come on leaps and bounds. Stuart Antrobus and I have introduced the ‘Cartoon of the Month’, marking the first day of most months with a related cartoon. The cartoons aptly present attitudes of the period, and show many of the prejudices which Land Girls and Lumber Jills had to overcome. They have provided a humorous start to the months of 2015 and seem to have gone down well on the website, Facebook and Twitter. 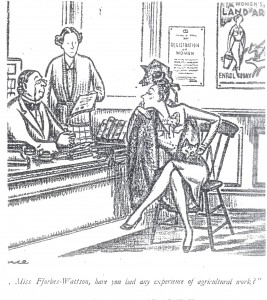 Source: “Laughs on the Land”, a Second World War anthology of cartoons. Courtesy of Stuart Antrobus.

I have very much enjoyed sharing the work of the Women’s Land Army and Lumber Jills. Back in March, I had the great honour of presenting in my own college on the First World War Women’s Land Army, celebrating International Women’s Day at Lucy Cavendish College, Cambridge.

As 2015 comes to a close, I would like to say thank you. Thank you to all those who continue supporting Women’s Land Army.co.uk, whether that through the website, on Facebook or on Twitter. I would also like to extend a big thank you to Stuart Antrobus, Catherine Procter and my family who have all played a significant role in different ways to developing the website.