The Women’s Land Army was disbanded on 30th November 1950. A final parade was arranged at Buckingham Palace in front of the Queen on 21st October 1950. Her Majesty observed that Land Girls ‘had obeyed the call of duty in the nation’s hour of great peril and need, and the nation owed them an everlasting debt.’ 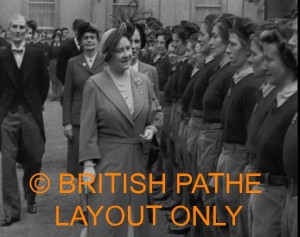 Queen inspects the Women’s Land Army in 1950. Click the image to see the British Pathe footage from 1950.

A Women’s Land Army Benevolent Fund was set up in December 1942 under the War Charities Act of 1942, and according to Twinch, pp. 132, its ‘original function was to help volunteers who met with illness or accident, and who were not covered by other forms of help, and to assist with grants or loans for those women intending to remain on the land after the war ended.’