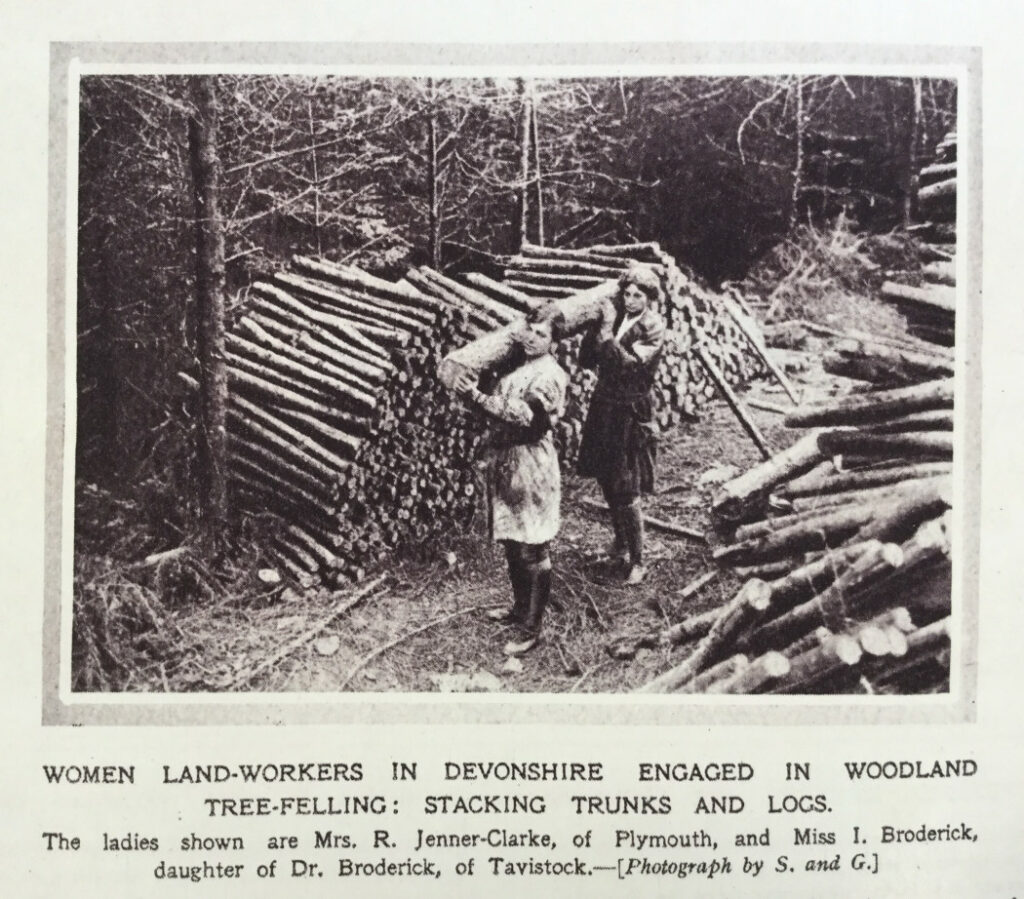 Photo from the Illustrated War News, 08th Aug 1917. Source: Tales From The Archive

Devon was one of the first counties in England to form a Women’s Land Army and Miss Calmady-Hamlyn, from an old Devon family who owned an estate on the edge of Dartmoor, was appointed an Inspector, and by speaking at regional and national meetings, became one of the key figures in promoting women to work on the land.
At a turbulent meeting of the Totnes Farmers’ Union in 1916 leading female figures including Miss Calmady-Hamlyn, were chastised and would “have done very much better with women’s labour by taking vacant farms and showing how they could produce poultry, pork and dairy produce. They had not done it but they were telling farmers to do it.”[The People of Devon in the First World War by David Parker]

Such was her conviction that women could be effective farmers and to convince the sceptics she was right, that in 1917 she established a farm exclusively run by women. Great Bidlake Farm had fallen from “one of the best bits of wheatland in the district, to grazing ground”. [Great Bidlake Farm The Landswoman September 1918 p194-197]

A trial had been made of the horse drawn Syracruse riding plough which proved to be ideal to be worked by women, making possible for eighty-two acres to be put under cultivation. Proving that with the right equipment women could be efficient in farming.

Twenty acres of wheat was prepared, amid the gloomy predictions of local farmers it would be doomed to failure on newly turned land and “bewitched” by female labour, instead it was awarded praise as the “the finest crops in the parish”.

There were four permanent land worker staff, supplemented by twelve trainees at a time who were instructed in field work. Miss Isaac, the horsewoman, was straight from school and the daughter of a farmer from North Devon. Responsible for cutting the Hay harvest she handled her horse team, for the first time in a mower, with considerable skill.

There were three North Devon farming families of Isaac’s, Ethel [18] daughter of Ade Isaac from Winkleigh, Elizabeth [14] daughter of Albert Isaac of Goodleigh and three girls in the same family, Francis [16], Alice [15] and Gertrude [14] daughters of William Isaac of Buckland Brewer. It was more likely to be Albert’s or William’s girls as the school leaving age at the time was 13.

To read more on the Women’s Forestry Corps in the Devon area, check out her excellent blog post here.