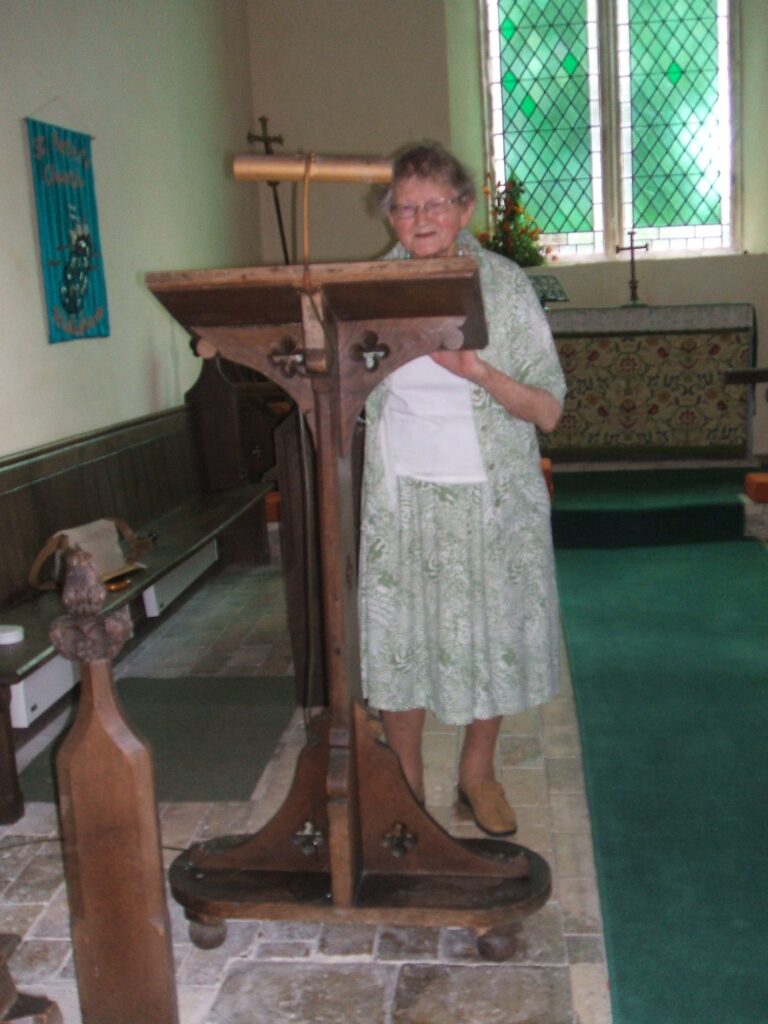 Angela Ottaway, reading her poem at the Church of St Peter in Redisham near Beccles, Suffolk. Source: Netta Swallow

“Angela is now 92 years old.  She was first based in the Land Army at the farm on Romney marshes.  It was not a good experience as she was employed by a woman who ran the farm and was a bully and abusive towards Angela.  As an example of this, one night she locked Angela out and she had to sleep in the barn.  Angela became ill working here and eventually she got a transfer to horticulture which she enjoyed very much.  She is still a keen gardener today and involves herself in a handbell ringing group, the local museum team of volunteers and the local church.  Her mother was in the Timber Corps in WW1.

Angela read her poem at the Church of St Peter in Redisham near Beccles, Suffolk.  It was “War, which has brought to others fear” by Hebe Jerrold, Women’s Timber Corps. The event was organised as part of a series of walks with a creative theme under the umbrella of Waveney and Blyth Arts.  The walk started from Redisham Hall where an open day with teas coincided with the event.  On arrival at the church the audience heard tales of Land Girls and their poetry, the Bloomsbury Set and Adrian Bell and how there were links between them.  Oonagh Segrave-Daly read a very moving poem “Let there be light” by Francis Heneage Burkitt.  She was inspired to write the poem after having read an article about the plight of children in occupied Europe during WW2.  She also read “Hedge Cutting” by Land Girl Alice Coates, a thoughtful poem about her concern for the environment. Then back for tea at the beautiful grounds of Redisham Hall.”